Strimzi supports accessing Apache Kafka using load balancers. We already have a full blog post dedicated to load balancers. But when running Strimzi on Amazon AWS, it will by default use the so called Classic Load Balancers. A lot of users seem to be asking about using the newer Network Load Balancers with Strimzi and Kafka. So in this blog post we will look at whether and how Strimzi could work with Network load balancers.

Network load balancer was added to Amazon AWS only later and has some additional features which are not supported by the older Classic load balancer. For example:

The last feature is especially interesting for use with Apache Kafka. It allows you to have only one load balancer to handle the whole Kafka cluster. With the Classic load balancer you would need a dedicated load balancer instance for each broker plus one additional instance for the bootstrap service.

For more detailed information about the different load balancer types in Amazon AWS and their pricing, please check the AWS documentation.

In Kubernetes, when you create a service with type Loadbalancer, it will by default create the Classic Load Balancer. For each service with a given type it will create a separate load balancer instance. It is easy to change the type of the load balancer by setting an annotation on the service. To create a Network Load balancer, the Kubernetes service needs to have the annotation service.beta.kubernetes.io/aws-load-balancer-type set to the value nlb. For more details about the annotation see the Kubernetes documentation.

You can set the annotation easily in Strimzi using the template feature:

(The example above has TLS and authentication disabled for simplicity)

This will set the annotation on the services and get your Kubernetes cluster to create the Network load balancers instead of the Classic ones. Apache Kafka and Strimzi will work with this out of the box without any additional changes. However, it will still create a separate load balancer instance for each Kafka broker plus the additional one for the bootstrap service. Once the cluster is deployed, you can easily connect to it using the load balancer DNS name and the port 9094:

But what if we want to share a single load balancer instance for all services? I didn’t find any way of telling Kubernetes to create only a single NLB instance and share it with multiple services. So we will need to approach this a little differently. When you expose a Kubernetes service with load balancer, it essentially creates a node ports on your Kubernetes workers and configures the load balancer to forward the data to the right node port. So to work around the limitations we can do the same manually. We can:

Let’s look in detail at each of these steps.

First, we will deploy a regular Kafka cluster with node port access:

In my case, the node ports are:

Creating and configuring the NLB

And configure the details of the load balancer: 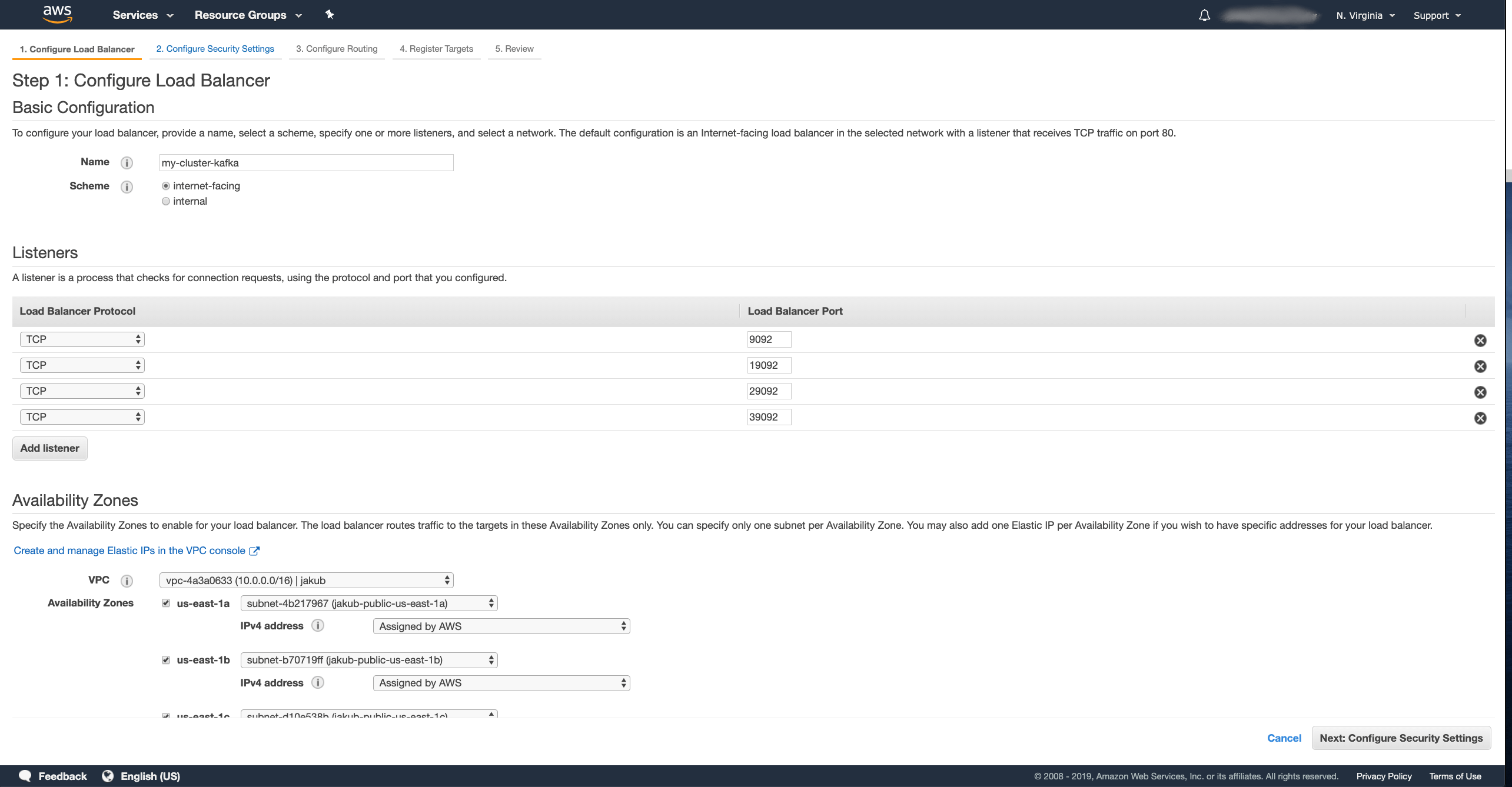 We can skip the security configuration since we do not use any TLS listeners and just click Next: … again to move to the routing configuration:

And press the Next: … button. 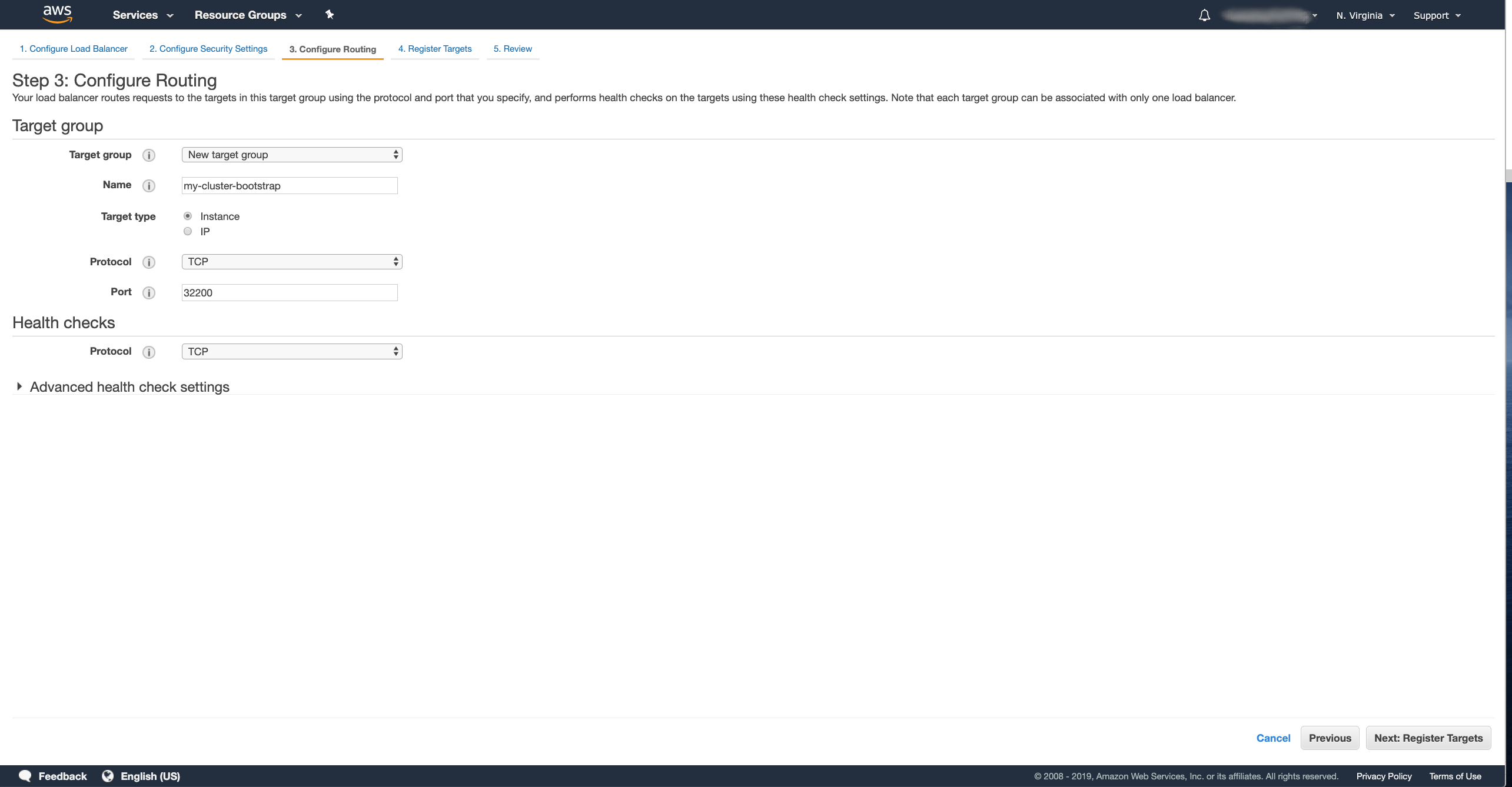 Now we have to register the target instances: 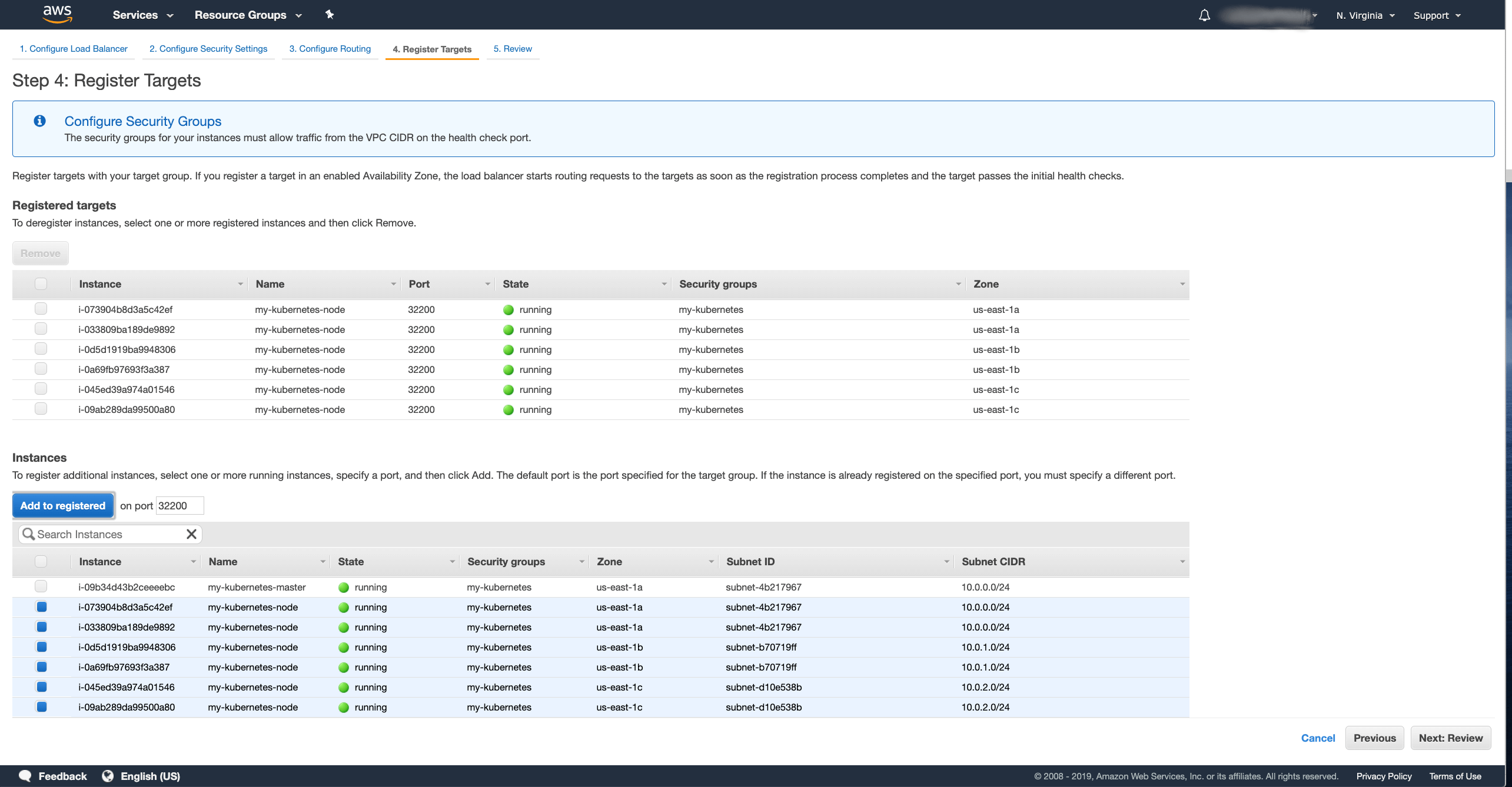 After you selected the nodes, press the Next: … button, review the NLB and if everything looks ok, press the Create button to confirm the creation. 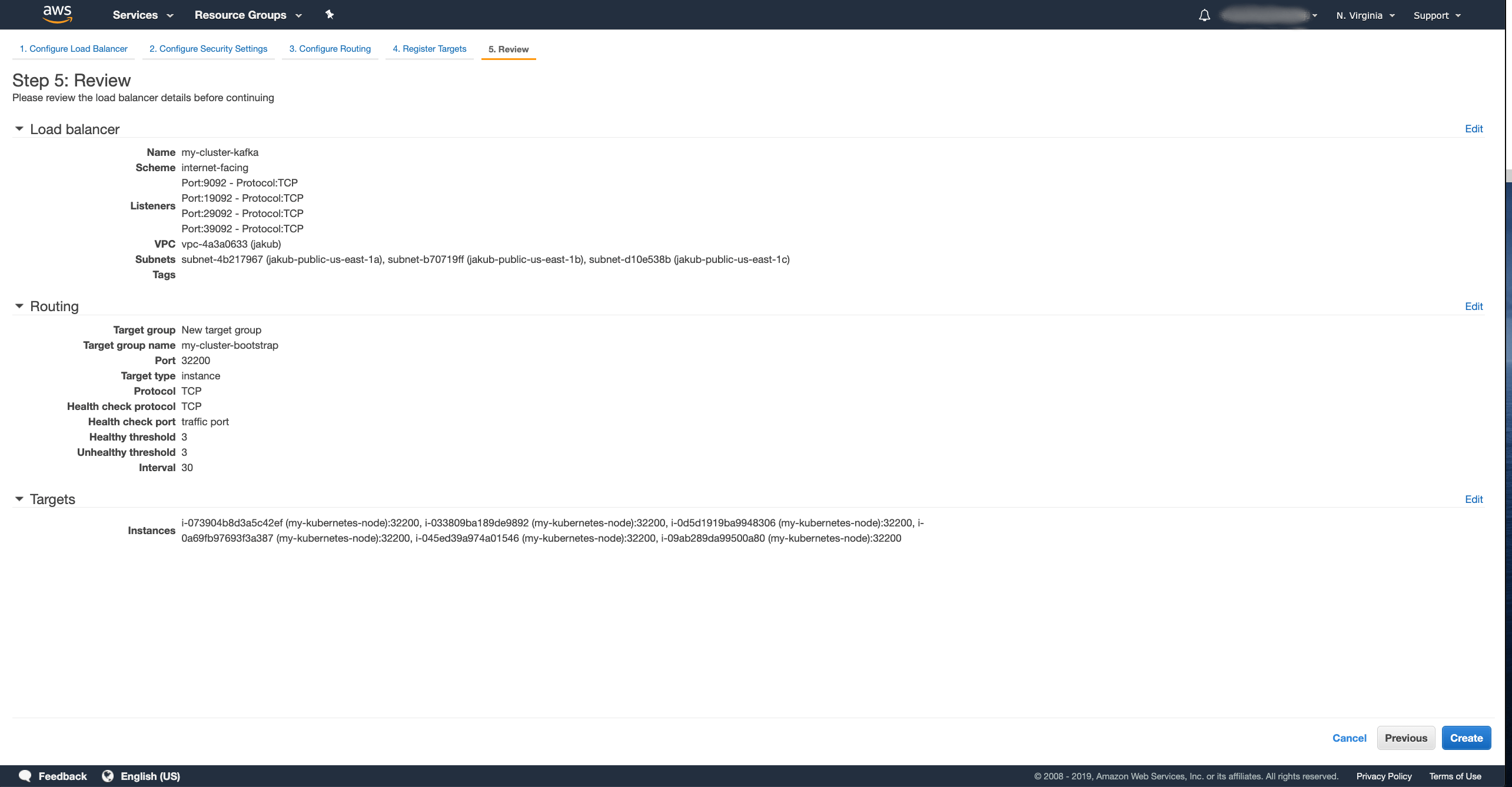 You should now see the load balancer being provisioned. That normally takes a few minutes and when it is done the State changes to active. 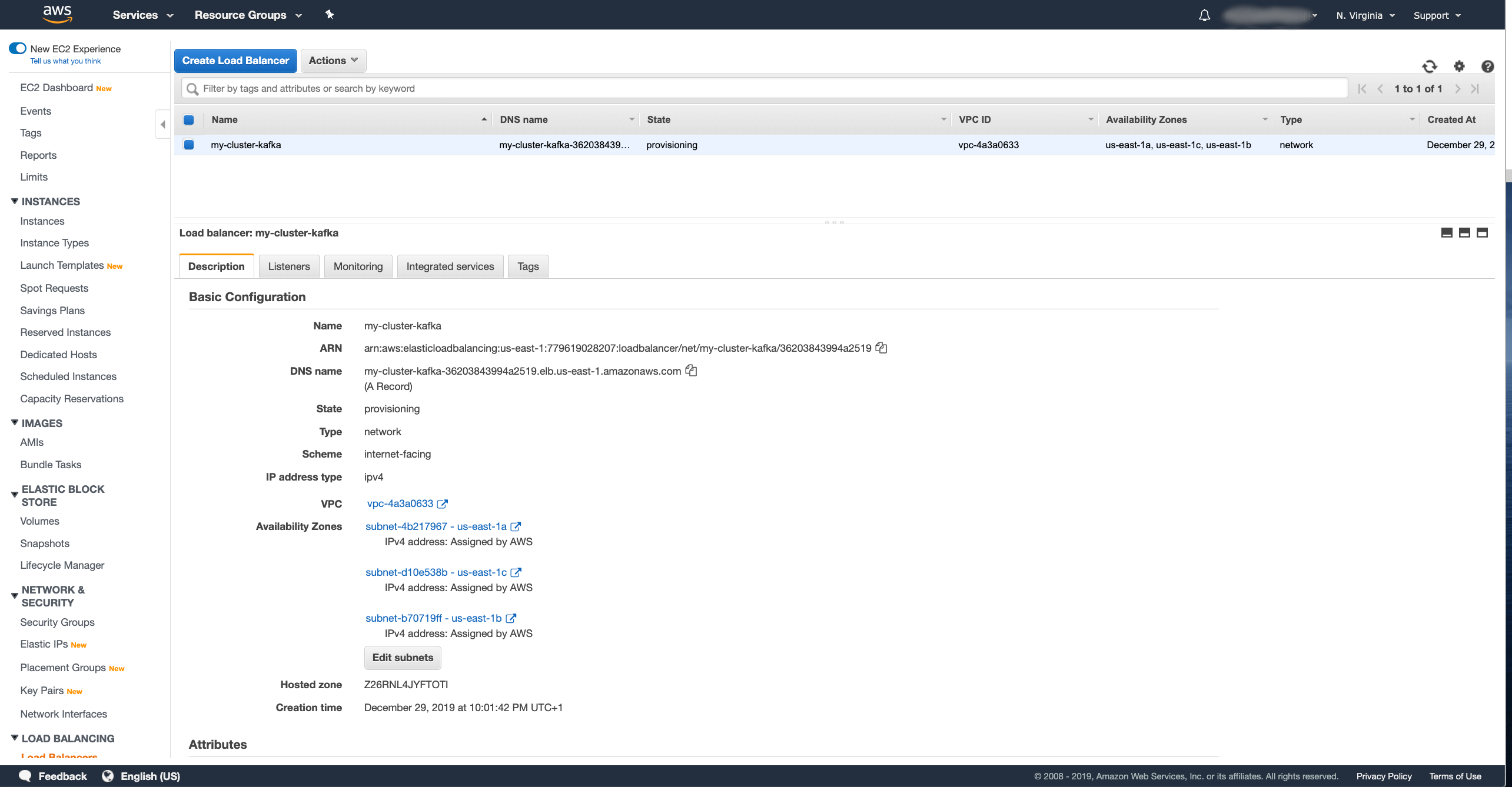 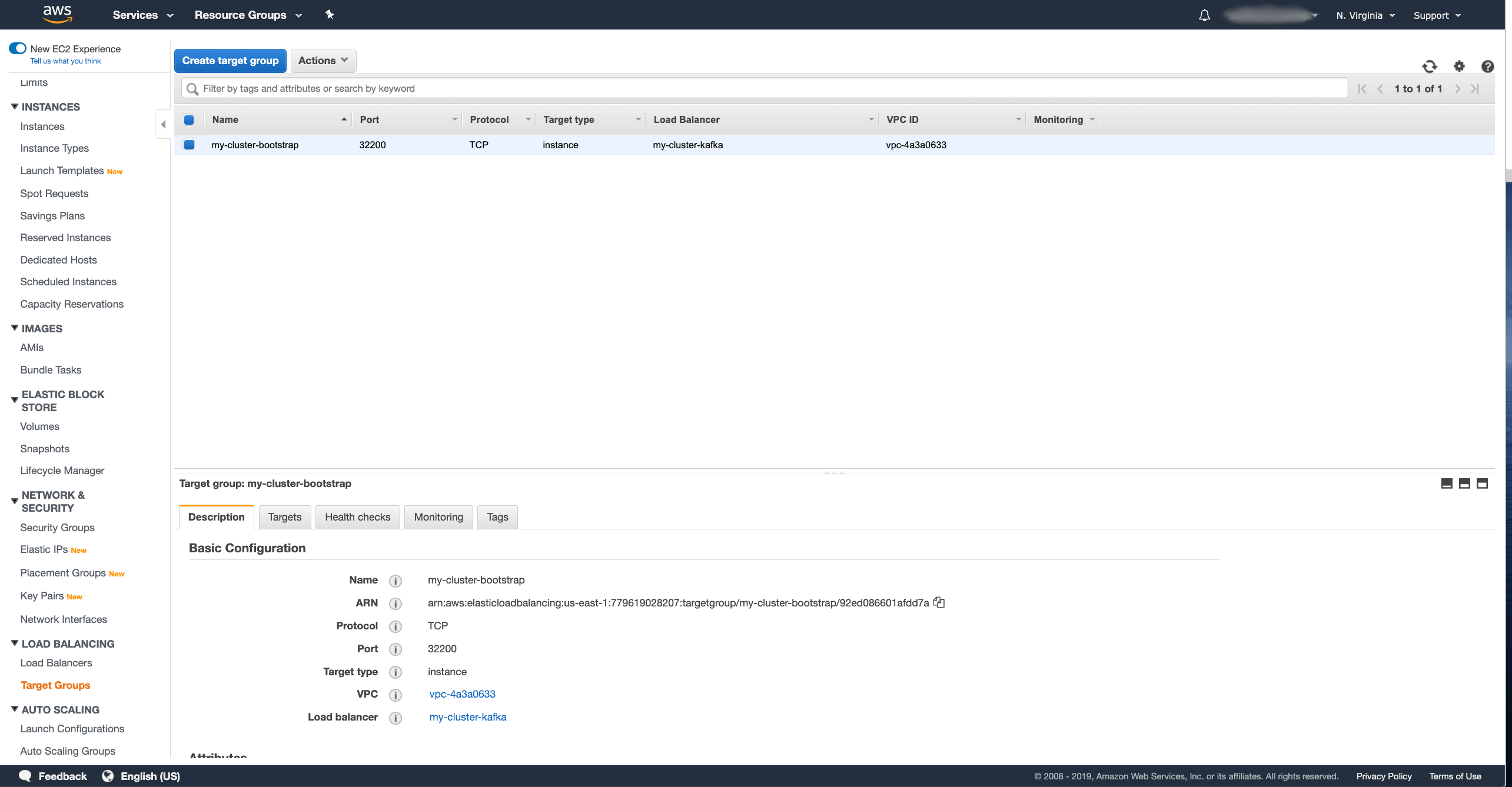 Click the Create Target Group button and in the wizard fill in the following fields: 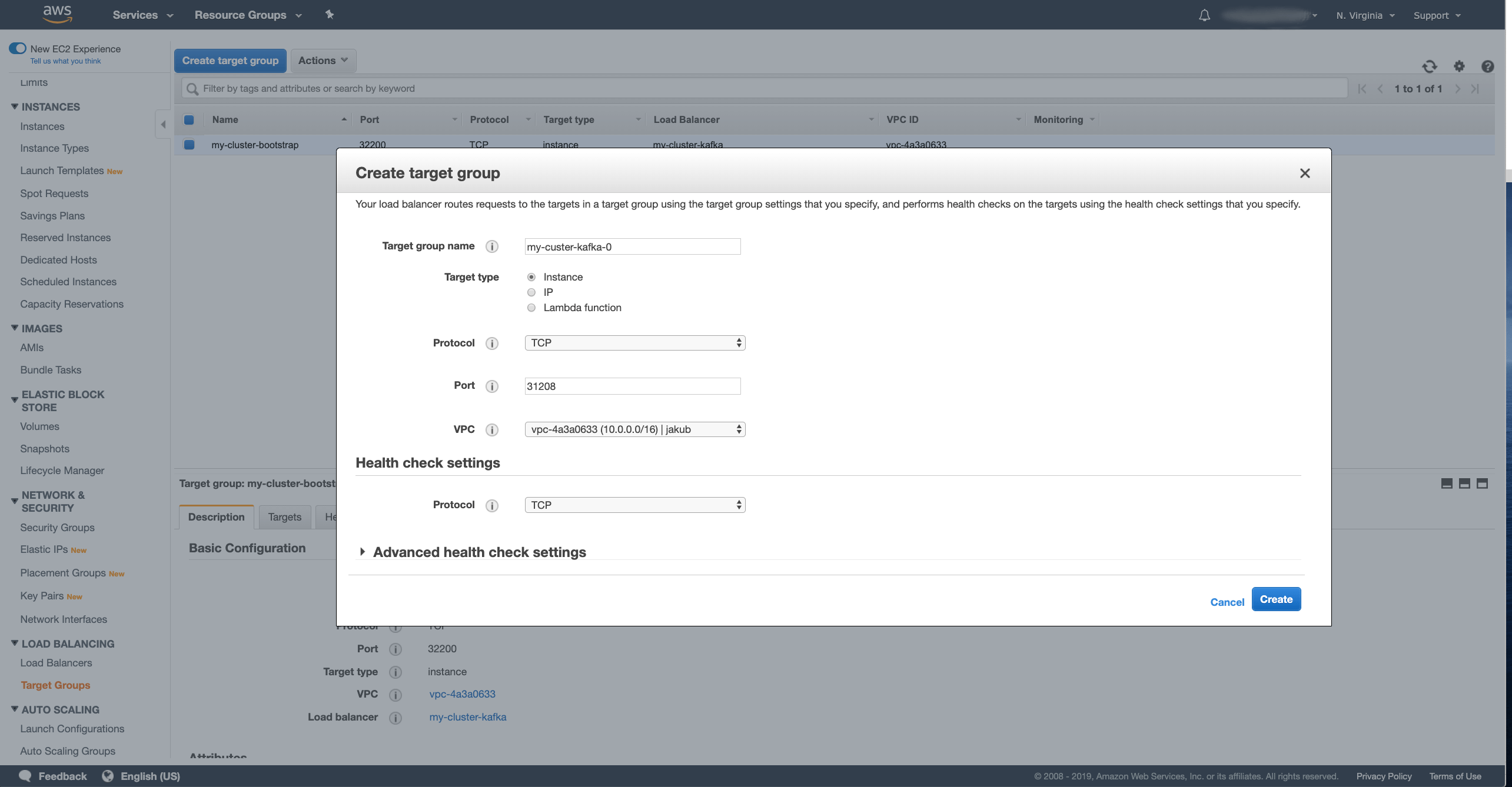 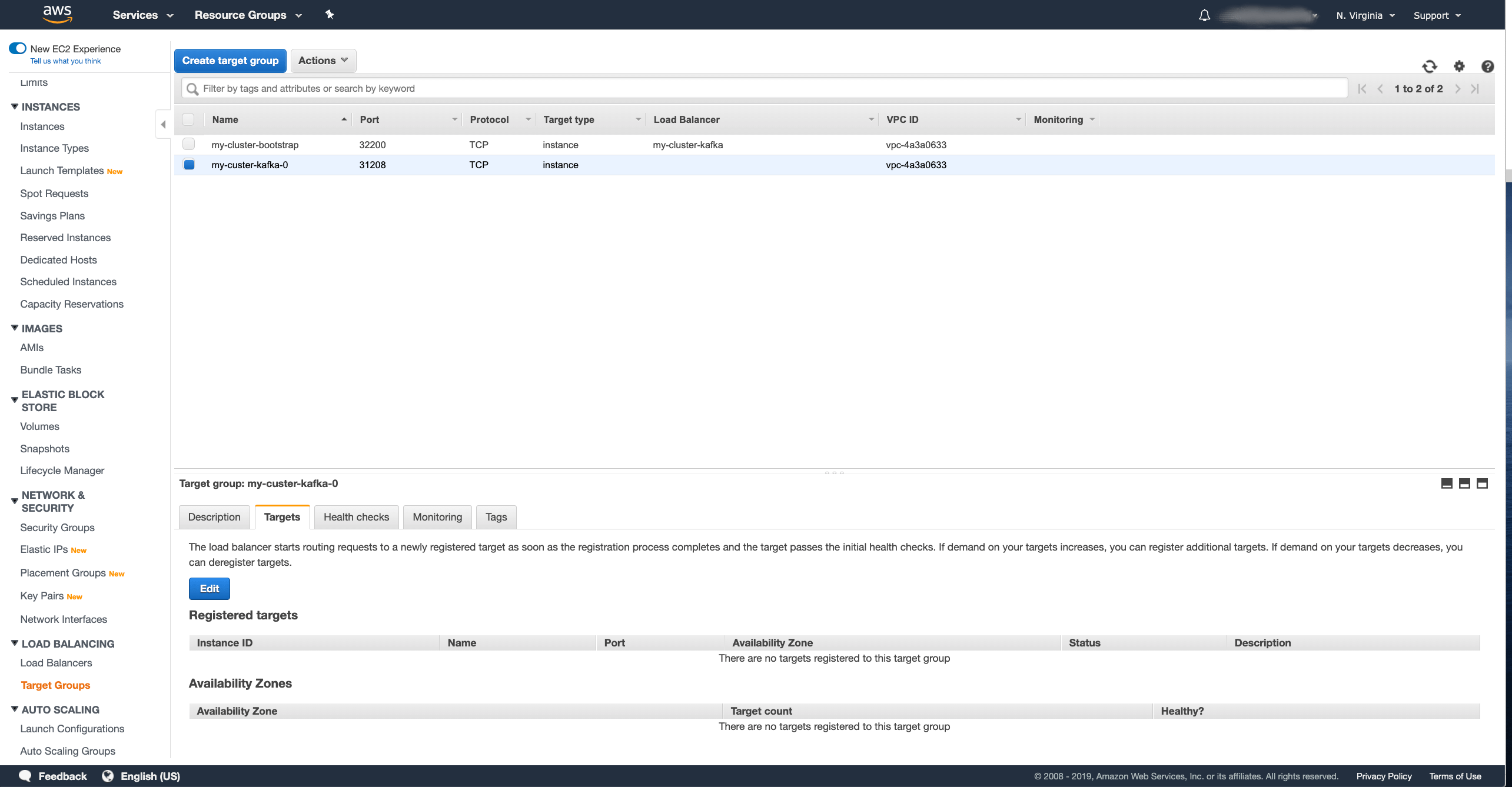 Select the same instances as you did for the bootstrap target and save them. 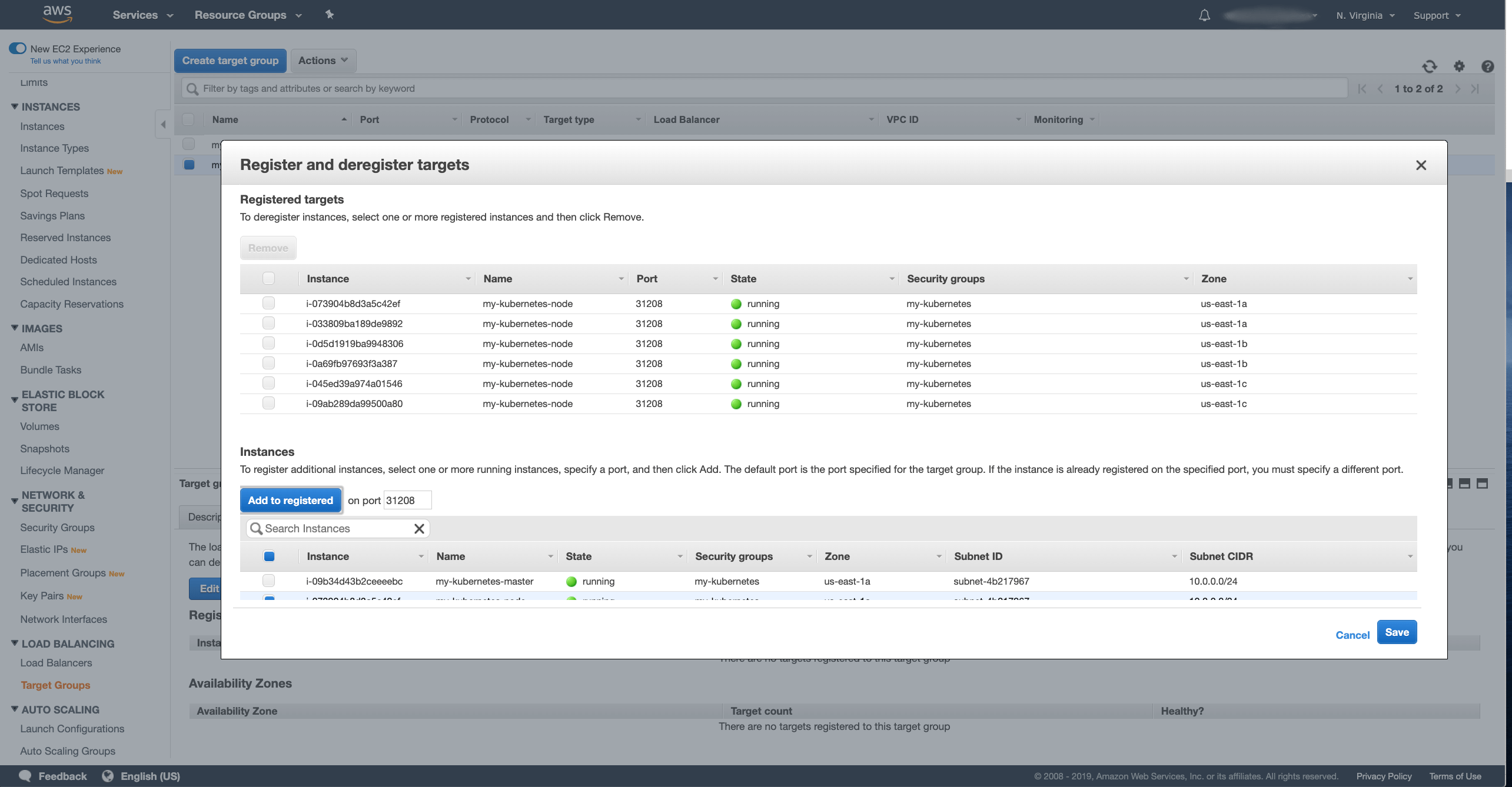 In the same way we need to add two more target groups for brokers 1 and 2. Now with the target groups ready, we have to register them with the listeners. To do that, go back to the Load Balancers section, select the load balancer we created and in the detail go to the Listeners tab. Select the listener for port 19092 and press the Edit button. 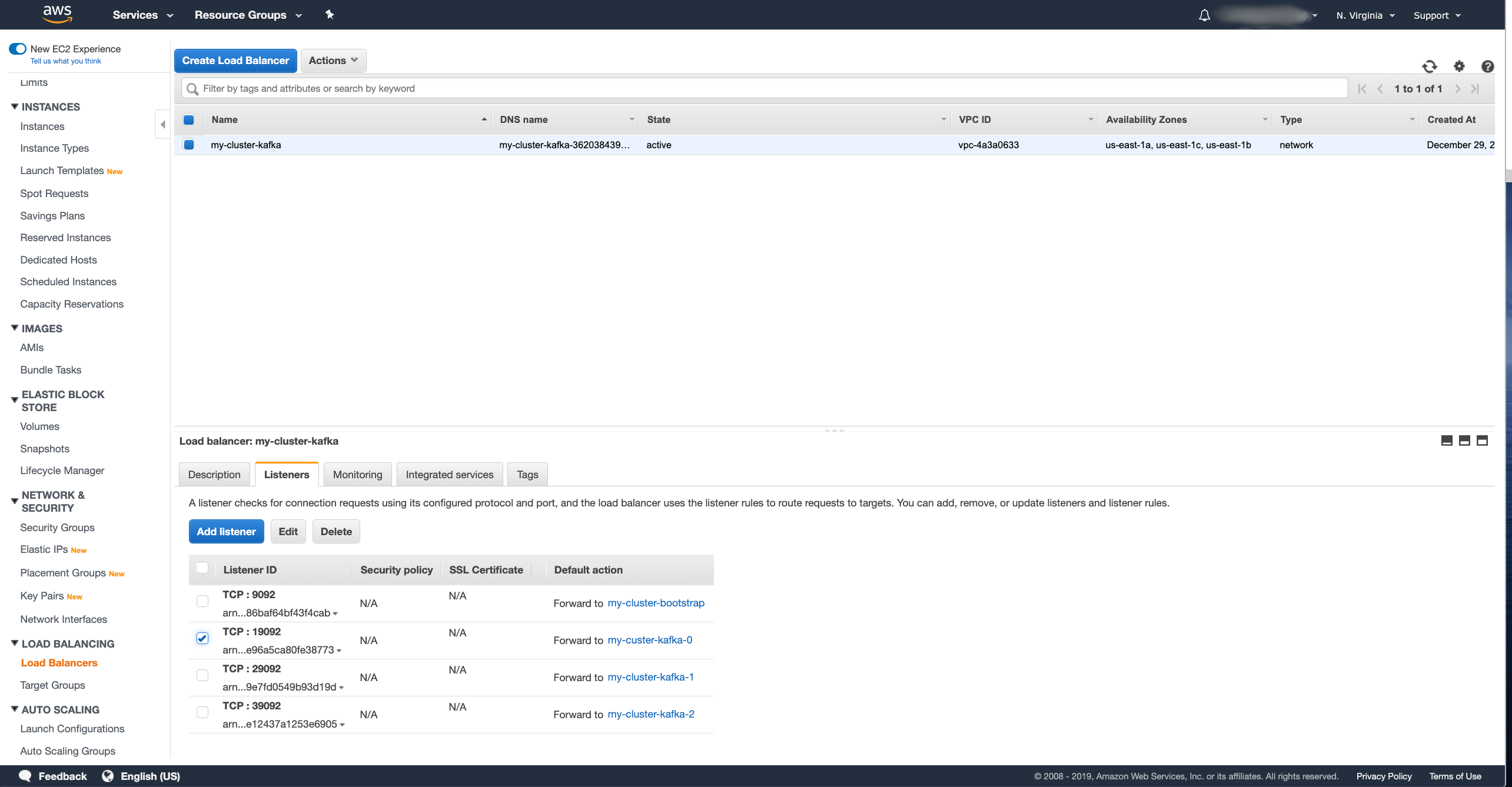 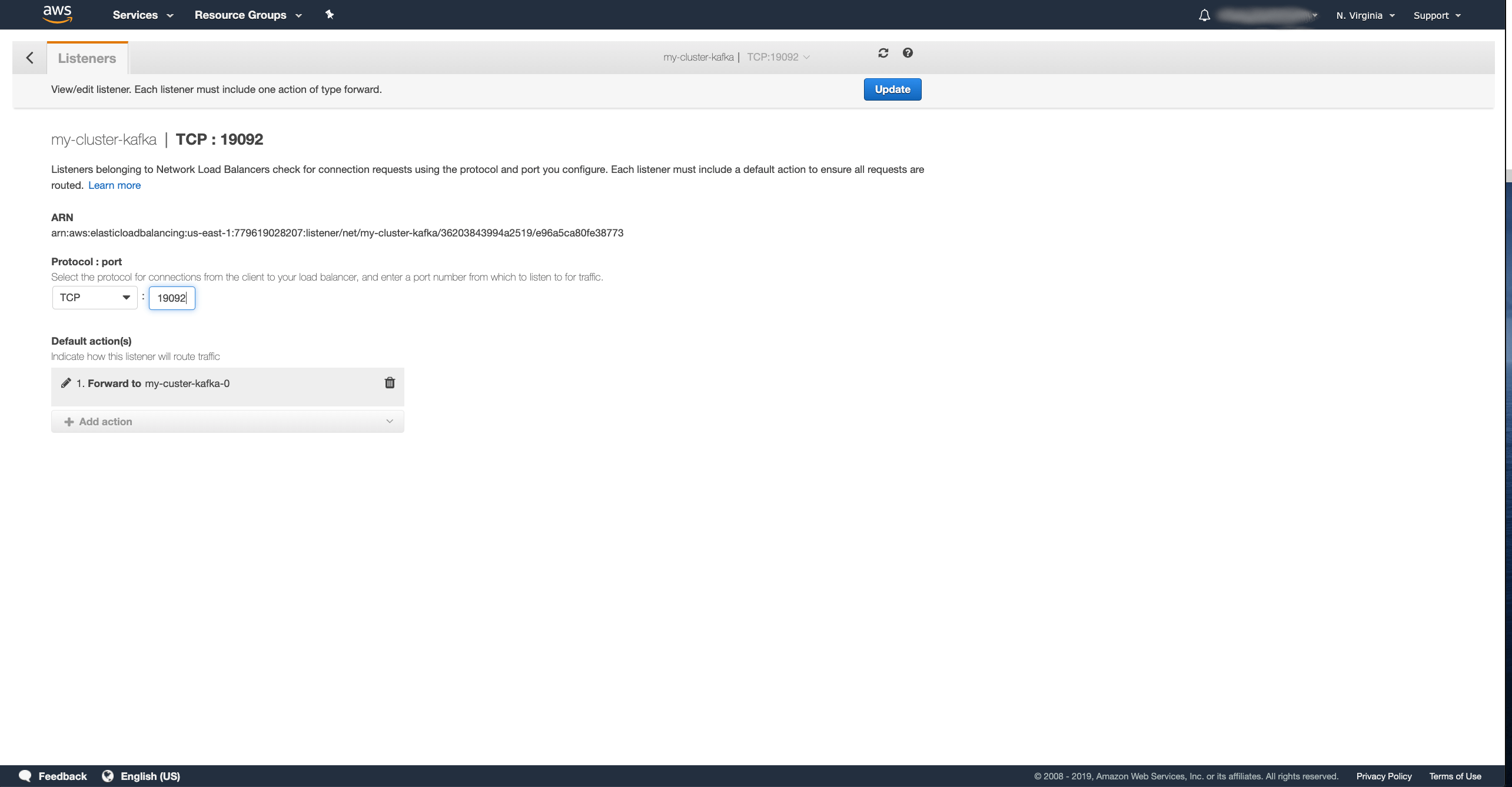 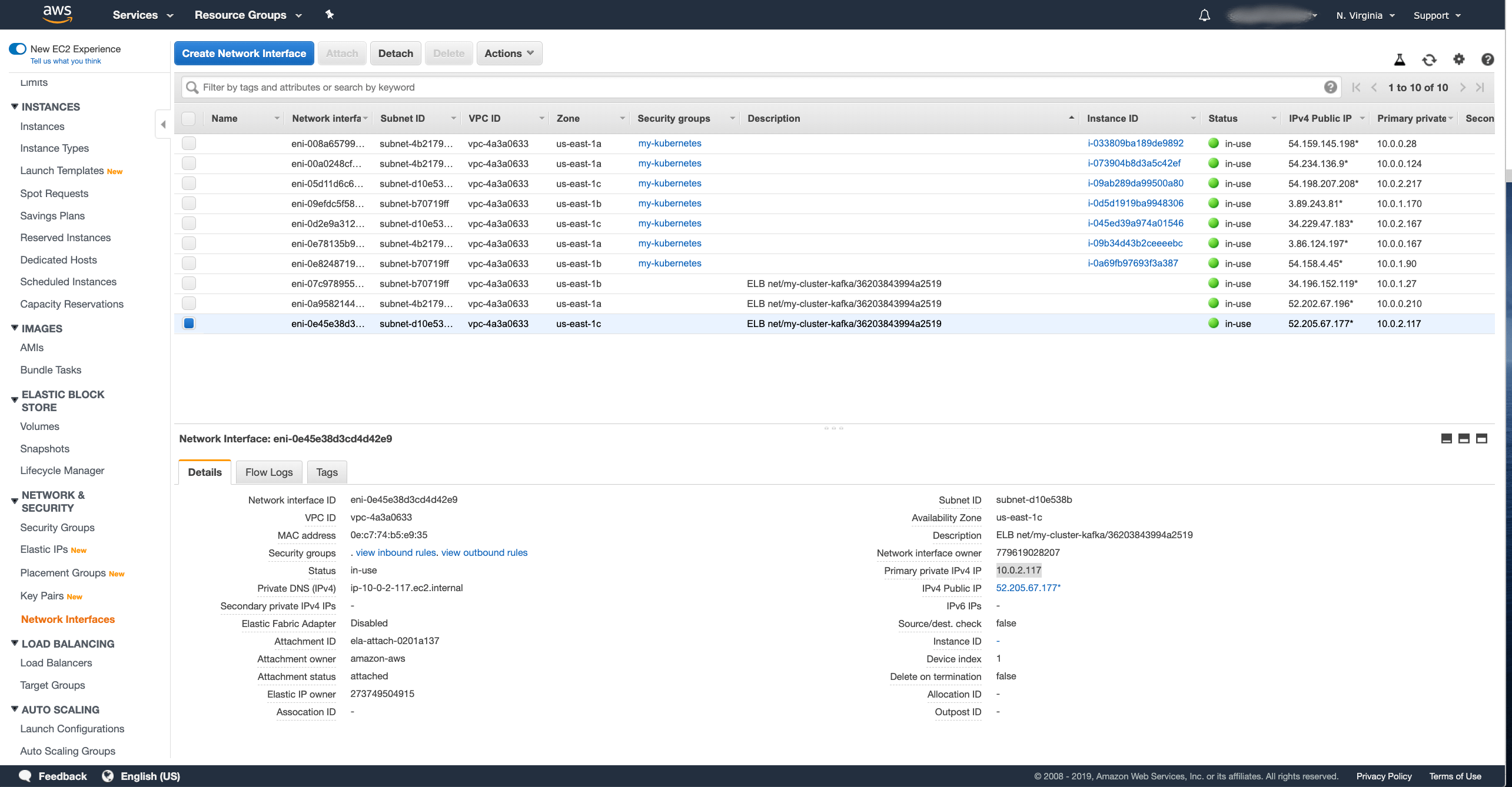 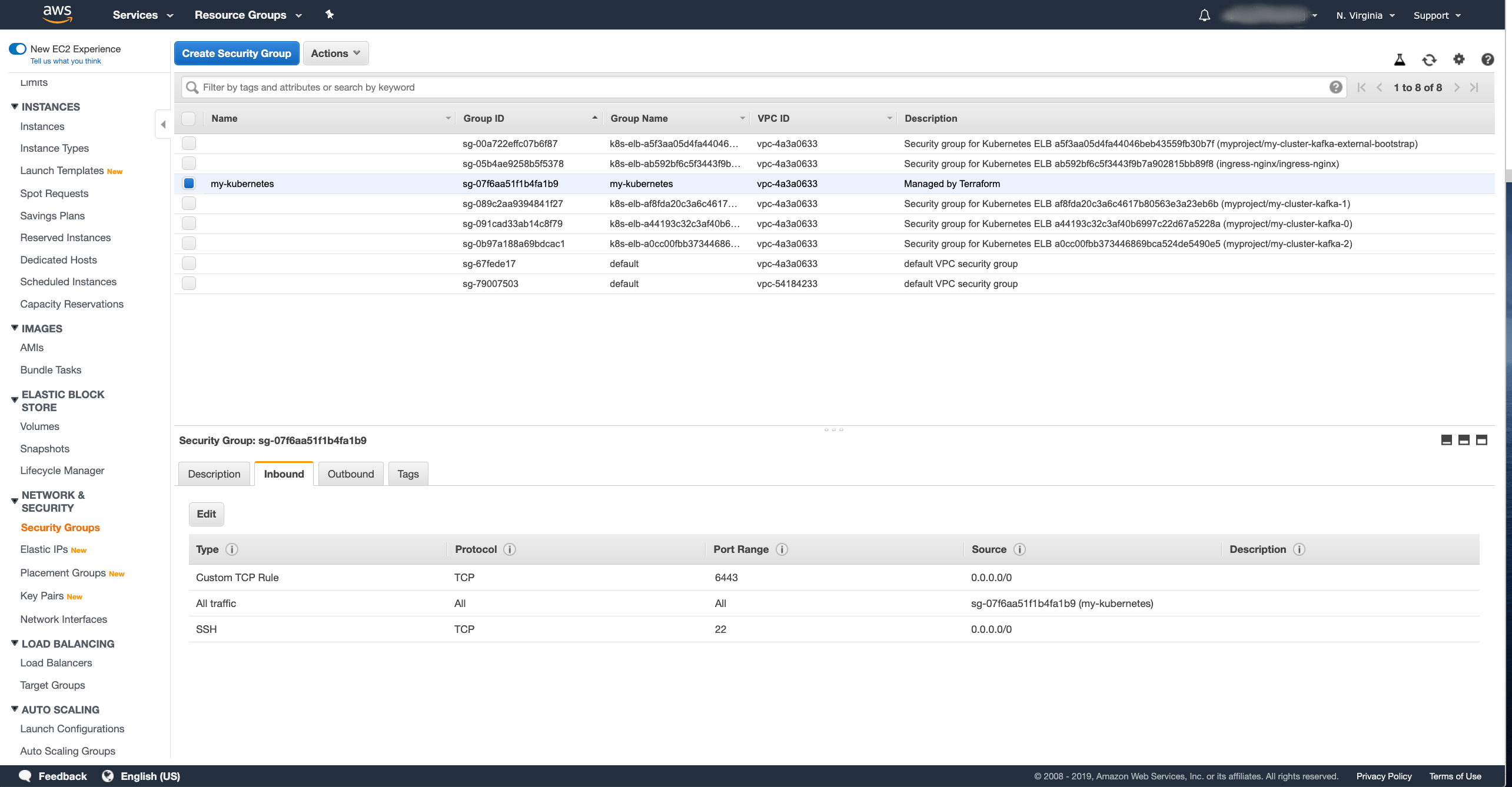 We will need to add several new rules here for each node port. Press the Add rule button to add a new rule. First we need to add rules for the load balancer:

These rules need to be added for each network listener IP and each node port. So in my case with 3 brokers plus the bootstrap service and 3 network interfaces, I will need to add 12 rules in total. If you are lazy like me and doing this only on your test cluster, you can also use a CIDR range such as 10.0.0.0/16 to add all network interfaces in one rule. You can also specify a range for the node ports instead of configuring them one by one.

After enabling the load balancer to talk with the node ports, we will also need to allow the clients to talk with the brokers. Unlike the Classic Load Balancer, the Network Load Balancer doesn’t have its own security group to configure the clients which can access it separately. The client IP addresses need to be configured directly in the EC2 security group. Therefore we need to add the same rules as we added for the load balancer also for the client. The only difference is that this time, instead of the load balancer IP address, we have to use the CIDR range from which our clients will connect. In my case, the client will connect from 88.208.0.0/16. 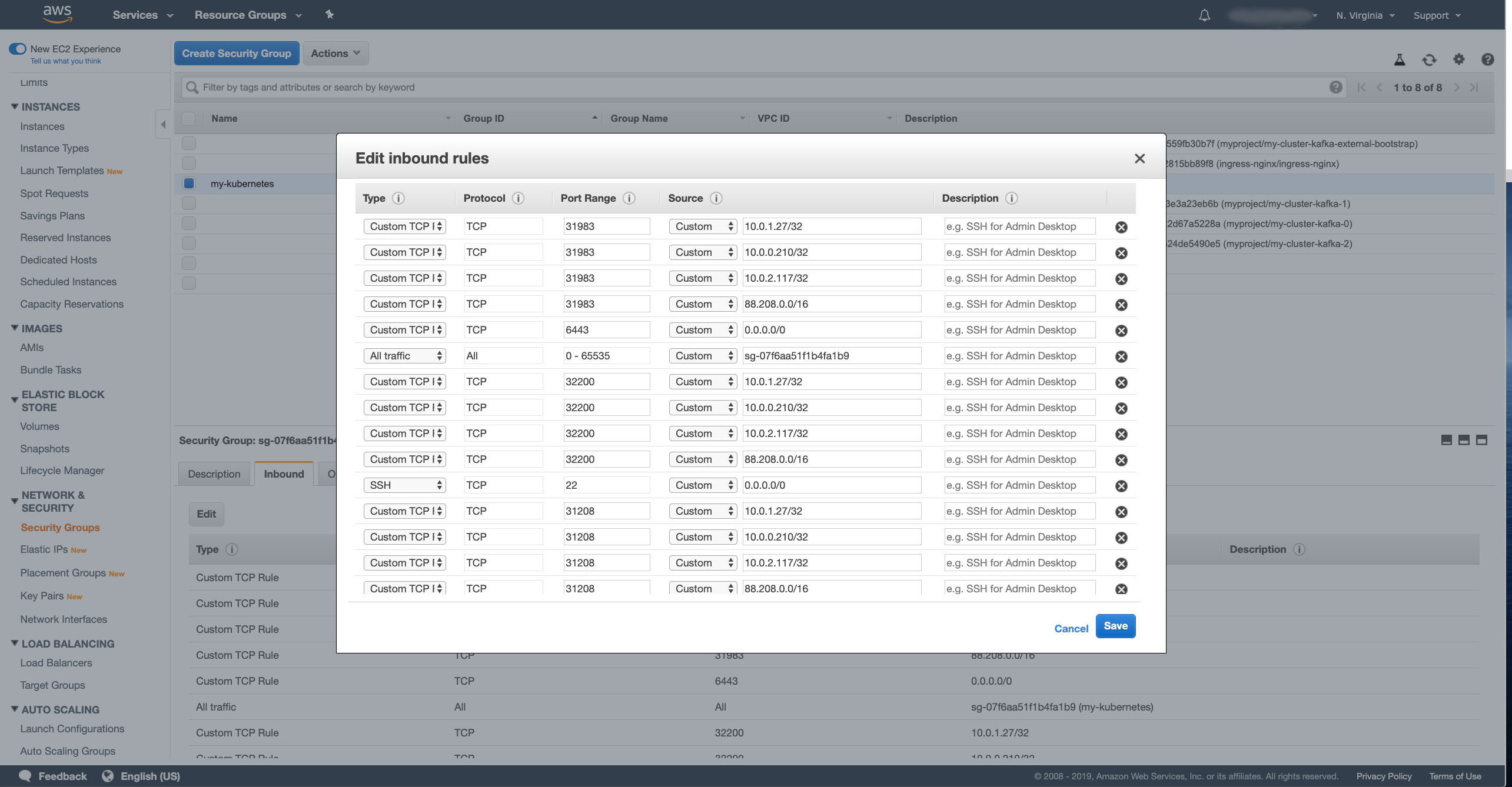 Once you have all the rules prepared, don’t forget to press the Save button to save the changes. Once you save the rules, we should have the Network load balancer prepared. But we still need to configure the Kafka broker to use the load balancer as the advertised address.

Once we change the configuration, a rolling update will be needed to reconfigure the brokers.

Once the rolling update is finished, we should be ready. We can try to connect with our client:

Are there any real advantages?

When it comes to Strimzi and Kafka, the main advantages of the Network load balancers over the Classic load balancers would probably be the price and the possibility of using a single load balancer instance for many listeners.

However, there are also some disadvantages:

Overall, the additional effort for using and maintaining the Network load balancers seems to be quite high. If you want, you can use them with Strimzi and Apache Kafka. But before you decide to do so, you should carefully consider whether the advantages are really worth it or whether you should be maybe using node ports directly. With node ports you could avoid the more complicated configuration and save the costs for the load balancers completely.